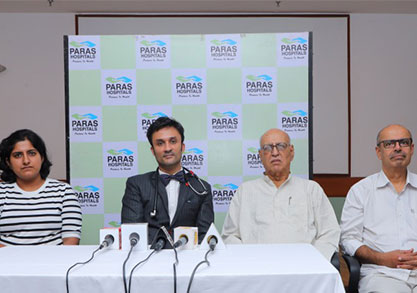 Gurgaon, 28,September 2018: A 86-year old man suffering from a rare combination of complete heart block and a major blockage in the left anterior descending artery (LAD) was saved after a complex angioplasty was followed by implanting Micra, the world’s smallest pacemaker. Instead of an open-heart surgery, this pacemaker was inserted into the patient’s body through the leg just like a stent.

“The patient was brought in serious condition with a heart rate of 28/minute. We had to perform an emergency angiogram to assess his heart condition that revealed he has 99 percent blockage in proximal LAD and 95 per cent blockage in mid-LAD. We had to give blood thinners. As a result, an open-heart surgery to implant a traditional pacemaker was ruled out due to the risk of heavy bleeding during the surgery. Micra was an ideal pacemaker for such patients as it does not require any cuts or stiches,”says Dr. Amit Bhushan Sharma, Unit Head and Associate Director – InterventionalCardiology, Paras Hospitals, Gurgaon, who operated on the patient along with a team of cardiologists.

LAD is a major blood vessel which supplies 70 percent of the blood to the heart. The situation was complex as implanting a conventional permanent pacemaker meant blood thinners cannot be administered which would have put the patient at an extremely high risk of heart attack.Also, it would have prevented angioplasty and stenting minimum for one week during which 99 percent blockage could transform into a total blockage and cause a life-threatening myocardial infarction (heart attack). If stenting was performed first then the implanting pacemaker had to be delayed for 6 months.

The pacemaker implantation that saved the octogenarian with potentially fatal blockages is the first in India; the other one was recorded in Brazil in 2016. So far, India has a total of 12 cases where Micra Transcatheter Pacing System (TPS) have been used.

“Micra pacemaker does not possess the risk of bleeding, or lead infection as the process does not require any cuts or stitches. In fact, in 15 per cent cases, the cables of a pacemaker break and create complication in patients after the surgery,” says Dr. Sharma.

Micra Transcatheter Pacing System (TPS) is the latest heart device with the most advanced pacing technology and is one-tenth the size of an available pacemaker, almost like a 50-paise coin. It is almost the size of a vitamin capsule and weighs 2 grams as compared to the 25 grams of a traditional pacemaker. The device is approved by the US Food and Drug Administration (FDA)in 2017 and is leadless, i.e. does not require cardiac wires (leads) or a surgical pocket under the skin to work. The device is a safe alternative to conventional pacemakers as it saves from the complications arising out of leads and uses low-energy electrical pulses to prompt the heart to beat at a normal rate.

Paras Hospitals Gurgaon is among the leading providers of treatment and care in the field of neurosciences, cardiology, orthopedics, nephrology, gastroenterology, and critical care in India.